January 17, 1805: the Decree on Opening of the Imperial University in Kharkiv came into force. It was the second university in the South of the Russian Empire. It was founded on the initiative of the local community with Vasyl Karazin at the fore, whose idea was supported by the nobility and the local authorities. Count Severin Pototski was appointed the first supervisor of the university, the first rector becoming the philologist Ivan Ryzhski. 1820—1850: for a certain period of time, the University of Kharkiv was autonomous with the rector being elected, however, in this period all its activity was strictly controlled (rectors were appointed by the Minister of Education), scientific publications and the academic process were censored. 1863: according to the new Statute, the university became partly autonomous. In the 19th — beginning of the 20th century, the University of Kharkiv had 4 schools: School of Physics and Mathematics, School of History and Philology, School of Medicine, School of Law. 1839: A veterinary school, which later (1851) became an independent institute, was established within the university, At this time, the university structure also included laboratories, clinics, an astronomical observatory, a botanical garden, and a library. In 1811, the Philotechnical Society was founded; the Mathematical Society of Kharkiv, the Historical and Philological Society of Kharkiv, the Naturalists Society, Societies of Physics, Chemistry, Law, etc. were established in the second half of the 19th century. 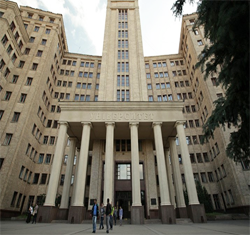 1917—1920: There was a struggle between advocates of Russian statehood and the Ukrainian course. Some of the professors who opposed new political realities left the university. Most of the Ukrainian professors remained in Kharkiv. They continued working in the institutions founded by the Soviet government: the Academy of Theoretical Knowledge (1920—1921), Kharkiv Institute of Public Education (KhIPE, 1921—1930), Kharkiv Institute of National Economy, Institute of Physics and Chemistry, and Institute of Law. Kharkiv State University, consisting of 7 schools: School of Physics and Mathematics, School of Chemistry, School of Biology, School of Geology and Geography, School of Literature and Linguistics (with Department of Philosophy), and School of Economy (with Department of Economic Geography) was restored on their basis in 1932—1933. In 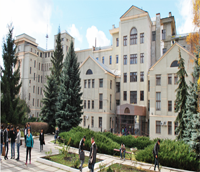 1936, the KhDU was named after the late Russian writer Maxim Gorky (though the latter was not related to the university during his life). During the German-Soviet war the KhDU was evacuated to the city of Kizilord in Kazakhstan, where it merged with the Kiev University forming the United Ukrainian State University. In 1943—1944, the KhDU returned to Kharkiv (the first academic year after the liberation of the city started on November 1, 1943). 1951 800 university students suffered from persecution in 1951 after they refused to pass exams in Russian. Court trials were held behind closed doors

October 11, 1999: President of Ukraine Leonid Kuchma issued a decree, in which he, “taking into consideration considerable contribution that Kharkiv State University made to training qualified specialists and to development of science” granted the status of a national university and named it after its founder – Vasyl Nazarovych Karazin 2004: the University was given a twin building (former Govorov Academy), located opposite Svobody square.

V.N. Karazin Kharkiv National University is involved in extensive international cooperation and is an active member of the international community of the leading European and world universities. It cooperates with 61 partners in 25 countries of the world.

rooms, quite study environment and surrounded with recreation center. Rooms on campus are available to students. All hostel rooms

are furnished and vary in size and number of conveniences. Dormitory rooms at hostel can accommodate 2 or 3 students to a room.

for both study and relaxation. There are common areas where students can play and mingle. Upon the students arrival on campus, specific accommodations are assigned and after a satisfactory health report the student will be accommodated to the room which is allotted to him. Also all rooms in hostels are provided with internet facility. GRADUATE MEDICAL COURSE – MD (M.B.B.S) DURATION OF THE COURSE: 6 YEARS. MEDIUM OF INSTRUCTION: ENGLISH/RUSSIAN