The emblem of Dr.B.R.Ambedkar Medical College, Bangalore established by Ananda Social and Educational Trust, is a symbolic expression of compassion and sacred service to be adopted for the practice of modern medicine.

A central wand with entwined snakes symbolizing Greek and Roman Gods of health called Hermes and Mercury is adopted as a symbol of modern medical sciences.

The wings above it depict human soul called Hamsa in Indian Philosophy. “Gautama the Buddha” incorporated in the emblem is a depiction of peace love and harmony

The motto of Dr.B.R.Ambedkar Medical College, is to provide selfless and quality health services to mankind.

The pole star guiding the destinies of the downtrodden of the society who inspired us to take upon ourselves the onerous task of running this institution.

We pray in all humility to these enlightened souls to encompass our students in the eternal aura of their compassion and make their tryst with this college personally purposeful socially meaningful and academically satisfying. 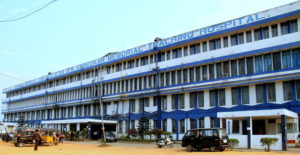 by opening up new avenues for them to find better slots in the social hierarchy by providing quality education. To this end a Medical college named after Bharatha Rathna Dr. B.R. Ambedkar was established by the Trust in July 1981

The Government of Karnataka under the stewardship of Sri.R.Gundu Rao accorded sanction to the Ananda Trust to start a medical college on 6th July 1981 at Cooke Town. Subsequently, the Karnataka Government and Late Sri.B.Basavalingappa, The Then minister,extended generous help with the allotment of 25 acres of land at Kadugondanahalli, Bangalore , at virtually no cost, to build its own campus.

The Trust, which has a rich experience in the field of Medical education, also runs Dental College, College and School of Nursing, College of Physiotherapy as well as Institutes of Medical Laboratory Technology and Radiography, Its motto is to serve the weaker sections of the community, handicapped socially, educationally & economically.

For having rendered generous help and advice in building the Institutions the AS&ET records its grateful thanks to:

To train doctors in the practice of medicine which is directed at serving the community.
To provide the knowledge base, empathetic attitudes and practical skills which are necessary to practice modern medicine.
To build the character and skills of our doctors to encourage their growth into well rounded, caring human beings.
To build and operate a hospital/hospitals that offer high quality, low cost medical care to underprivileged sections of society.
To provide an atmosphere that fosters the academic growth of faculty members and facilitates scientific research.
To empower the personal growth of all employees, and promote their physical, social, economic and psychological well-being.
To make a positive contribution for the betterment of SC and ST people by opening up new avenues for them to find better slots in the social hierarchy.

In May 1987, the college moved to its own campus at Kadugondanahalli. The elegant and imposing college building with its beautiful architectural design attracts the attention of all visitors.

It is well planned and accommodates the Administrative block, Trust office, Central Library, Pre-Clinical and Para-Clinical departments, Sports section . There is a modern OPD Block with clinical departments attached for teaching and research with an auditorium and cultural dept. The hospital with 780 beds is also situated on the campus.

The college was initially affiliated to the Bangalore University and is now affiliated with the Rajiv Gandhi University of Health Sciences. The college runs the MBBS course as well as post-graduate courses in many subjects that are recognized by the Medical Council of India (vide MCI Order MCI/50(4)/91-Med./19649 dt. 22/11/1991).

The intake of MBBS students per academic year is 100, out of which 10% belong to SC/ST. Also on campus are the School and college of Nursing, Institute of Physiotherapy, Paramedical Courses, and the Gents and Ladies Hostels, Staff quarters, Cafeteria, Pharmacy, Central Lab, Animal House, ATM and post-mortem block.

We are Providing Dr.B.R .Ambedkar Medical College Bangalore Admission 2020-21 From Rajkot, Surat, Ahmedabad, Vadodara, Palanpur, Gujarat, India 2020-21,if you are looking then get in thuch whith us !